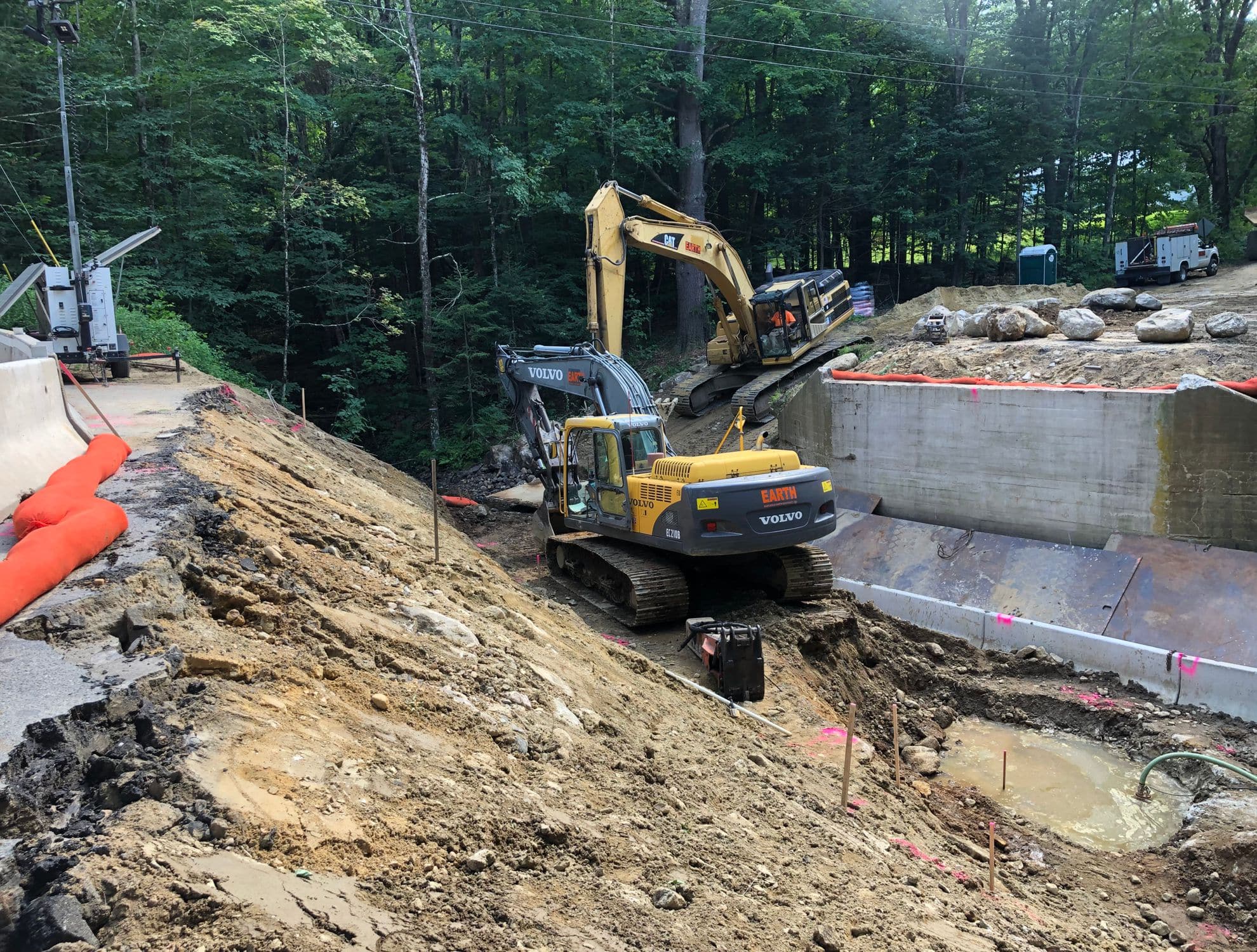 This summer I had the pleasure of working very close to my hometown as a resident project representative (RPR) for two bridge construction projects in the Town of Gilmanton, New Hampshire. Funding from NHDOT’s Municipally-Managed State Bridge Aid Program allowed the Gilmanton to upgrade two pieces of its aging bridge infrastructure on Stage Road.

The previous bridge crossing at Nighthawk Hollow Brook was comprised of steel beams with a concrete deck. Originally built in 1930, and rehabilitated in 1960, the bridge was undersized to convey water flow, causing frequent roadway flooding by over a foot. A hydraulic analysis of the bridge revealed that to prevent future flooding, the roadway should be raised by several feet and the bridge span should increase. Less than a mile to the south is the bridge at Unnamed Brook crossing, which was also built in 1930. The supporting earth was washed away around the existing bridge because of puddling on the roadway and poor drainage. Hoyle, Tanner partnered with the Town to design both replacement structures, obtain necessary regulatory agencies’ permits, and administer the construction phase.

The design of a new 54-foot span bridge with over 3 feet of raise in the roadway profile over Nighthawk Hollow Brook was completed in late 2018. The design of the Unnamed Brook crossing was completed at the same time and included a 22-foot span bridge with drainage and roadway safety improvements. The Town’s goals for these projects were met with the design of two low-maintenance bridges with a long service life and improved water flow and drainage, while successfully addressing environmental permitting requirements. The projects were advertised together under one contract for bidding in winter 2018-19, and awarded to E.D. Swett, Inc. of Concord. Construction commenced in May 2019 with the installation of a temporary bridge at the Nighthawk Hollow Brook crossing, and a detour at the Unnamed Brook crossing in July 2019.

As the RPR for this project, I was responsible for ensuring that the daily construction activities adhered to the contract plans and specifications. It involved effective organization, documentation, and measurement of the construction progress, but most importantly, it involved constant communication between the contractor, subcontractors, client, and engineer.

One of the first things I like to do as the RPR of a new project is establish a feeling of trust with the Contractor’s foreman, who controls the day-to-day operations of the project site. When working with someone new as a young, female engineer, I have been cautioned that people may doubt my abilities, as opposed to my male counterparts.

While I have been cautioned that people may not take me as seriously as my male counterparts, I did not feel that having to build trust or learning to communicate in a direct manner had much to do with me being a female. I know from experience that men and women communicate differently. Our choice in words, our verbal and nonverbal actions, and our responses to each other are different. Because I’m comfortable with verbal communication, I learned to alter my statements, questions, responses, and conversations in a way that was as clear as possible to each person I came in contact with.

Instead, I think it came down to being younger and not as experienced; that even a younger male engineer would have to prove his knowledge and win the trust of the construction site workers. Thankfully, with a high confidence level, and using effective communication, I was able to gain the trust of the foreman by proving my knowledge in a variety of situations. Having this trust with the foreman allowed us to rely on each other for the remainder of the project and easily work through any discrepancies.

Overall, my experience has been positive as a woman on a construction site. I feel confident in my abilities to make sure the work gets done on time, correctly, and under budget. I feel comfortable in this type of workplace communicating with people very different than myself. The men I have worked with are kind, understanding, hardworking, and like to joke around when there’s time for it.

Through the efforts of all parties involved, the two bridges were reopened to traffic in November 2019. Both projects were substantially completed and under budget with minor cleanup work and final paving scheduled for late spring 2020.