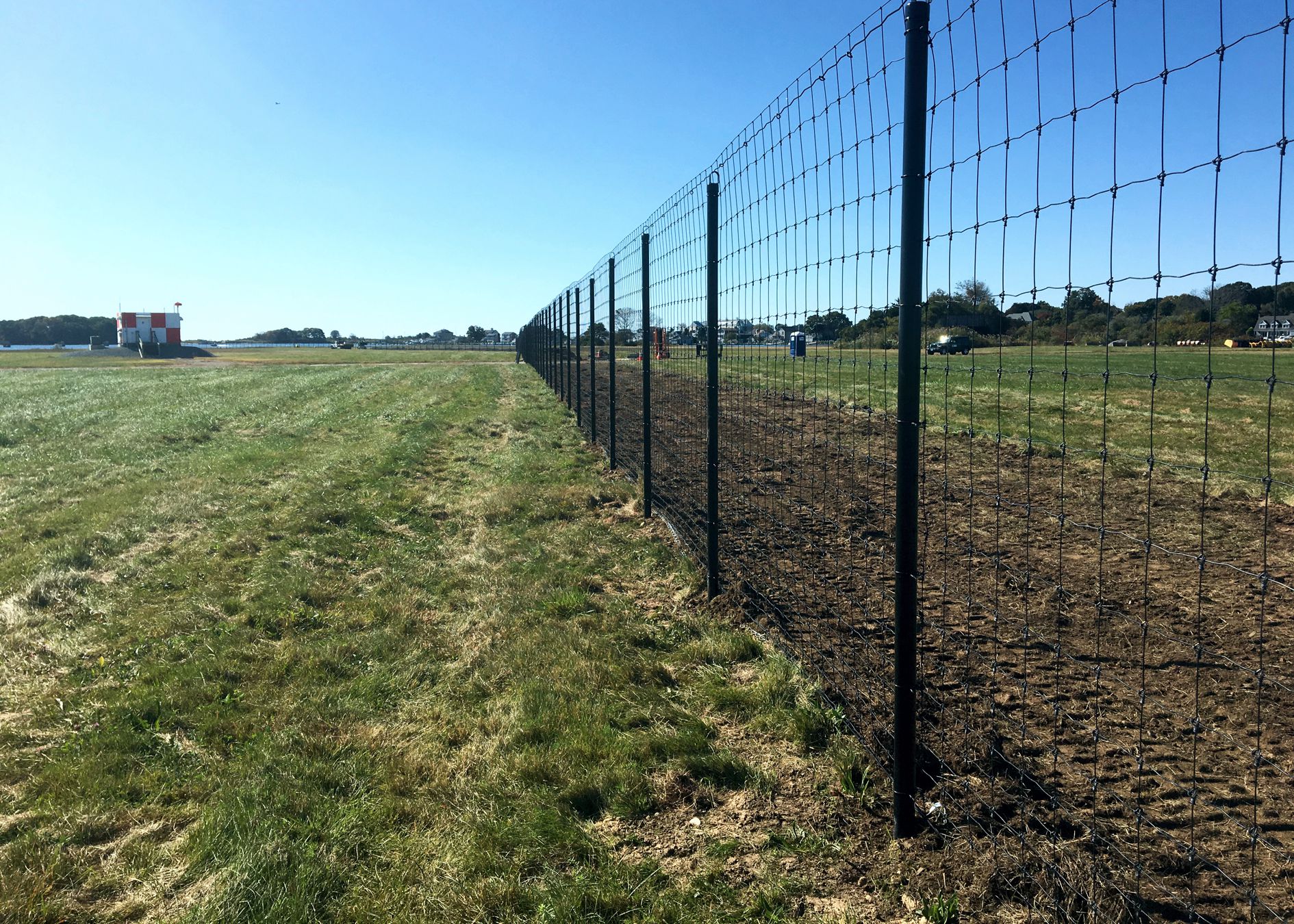 If you have ever had a close encounter with wildlife while driving your car – glimpsed a deer, coyote or even a large turkey or raccoon at the side of the road – or worse, been involved in an accident caused by hitting wildlife – then you can understand how frightening and dangerous these situations  are for a pilot  flying a multi-million dollar airplane. Seeing  a deer or coyote on the runway before take-off could cause a string of heart palpitations and sweaty palms!

Interactions between wildlife and aircraft can result in human injuries, even fatalities, along with injuries and fatalities to the animal, and costly repairs to damaged aircraft. The Federal Aviation Administration (FAA) – the federal transportation agency with the authority to regulate all aspects of civil aviation, including safety – has deemed prevention of wildlife from accessing airports as one of their primary safety concerns.

The first step to resolving any issue is identifying the extent of the problem: how many and what types of wildlife have access to the airport, where they come from, what attracts them to the airport, and how many interactions have occurred at the airport between wildlife and aircraft.

FAA keeps a National Wildlife Strike Database that is available to the public and provides accounting at each airport in the US of the wildlife strikes – or moments where a wildlife physically interacted with an aircraft. These strikes are reported annually and include data such as what type of animal, what type of aircraft, time of day, and height of the aircraft at the strike. Airport operations staff keep track of wildlife strikes and provide the data to FAA so that this database can be available for review. It is one important tool to assessing the extent to which wildlife interactions are an issue at an airport.

According to the National Wildlife Strike Database, deer and coyote are the most frequently struck terrestrial mammals (37 and 34 percent, respectively). Deer are responsible for 92 percent of the mammal strikes that resulted in damage. From 1990 to 2015, over 1,107 deer-aircraft collisions and 487 coyote-aircraft collisions were reported to FAA. Of these reports, 932 of the deer strikes (84 percent) and 43 of the coyote strikes (9 percent) indicated the aircraft was damaged as a result of the collision (FAA CertAlert No. 16-03, 8/3/2016).

Airports are also encouraged (or, if the airport is large enough, required), to complete a review of the airport for potential wildlife use and develop a plan for prevention of strikes per the FAA Advisory Circular 150/ 5200- 38–Protocol for the Conduct and Review of Wildlife Hazard Site Visits, Wildlife Hazard Assessments and Wildlife Hazard Management Plans. An airport is also required to complete these steps if there has been multiple wildlife strikes over a certain time-period, or there is a single strike that either affects an engine or results in substantial damage that would result in major repair or replacement of the aircraft.

These site reviews, performed by professionals trained in providing this type of review, coupled with the strike data over time, offer a good view of the potential risk at each airport for wildlife strikes.

The next step for an airport is to develop a Wildlife Hazard Management Plan, which identifies the specific actions the airport will take to mitigate the risk of wildlife strikes on or near the airport. Possible steps include:

Airports have a list of wildlife “harassment” techniques to scare wildlife away from the airport to prevent strikes that includes, some of which are similar to those you may use in your backyard garden-  shiny or flashy pinwheels or reflective tape, or “googly-eyed” owl or hawk statues to scare away smaller birds. Loud noises, flares or even air cannons can be shot from a gun or cannon to scare wildlife and birds from the area.

One of the most effective ways to prevent wildlife strikes of medium- to large-sized mammals such as deer, coyotes and raccoons is to install a fence that surrounds the airport and prevents wildlife from physically entering the airport. This fence, sometimes referred to as a wildlife deterrent fence or wildlife exclusion fence, can be of varying heights and materials, but the FAA recommended design is an 8-foot chain link fence with three strands of barbed wire running along the top positioned so that the barbed wire sections are angled away from the fence to deter animals from climbing over the top. Often, the fence will have a horizontal bottom section called a “wildlife skirt” that is anchors the bottom edge of the chainlink fabric to the ground and is buried several feet deep to prevent animals from digging under the fence.

Hoyle, Tanner has assisted several of our aviation clients with installing, repair, and maintaining wildlife fences. One key project was initiated in 2012 after a wildlife strike between a plane and a deer at the Tweed New Haven Airport (HVN) in New Haven, Connecticut. This dangerous incident prompted FAA and Tweed New Haven Airport Authority to work together to plan for, fund, design, and install fencing to surround the airport to prevent future such interactions completely. This project had several challenges, including the fact that this airport is situated at the southern edge of Connecticut and has several areas of coastal marsh on the airport and freshwater wetlands that could not be avoided to achieve the goal of complete fencing. The success of this project was due to obtaining the required permits to allow for installation of the fence through wetlands from US Army Corps of Engineers (USACE) and CT Department of Energy and Environmental Protection (CTDEEP) while keeping the project on schedule and within the proposed budget. The fence was completed in 2014 to the cost of approximately $1.5 million.

Similarly, we assisted the Groton-New London Airport (GON) in Groton, Connecticut with the installation of wildlife fencing along several airport sections. However, because the southern side of the airport faces Long Island Sound, fencing could not be installed around all areas; fences must be offset from runways and taxiways by set distances so that they do not become hazards to aircraft as they take-off and land. In essence, the FAA design criteria for fencing ensures no trade-off between one problem (wildlife) to another (fences becoming hazards). The required offsets at this airport would have placed the fence into deep water within the tidal channel on the southern side, not a permittable action. As a compromise, we worked with airport staff, wildlife biologists, and state and federal permitting agencies to determine the best fencing locations to reduce the spots where wildlife could access the airport to the greatest extent feasible. This solution allowed airport staff to focus observation and deterrence measures in the unfenced areas, which resulted in better vigilance. This airport also installed a varying mesh fence, instead of a chain link, in areas that faced a public park so that the visual impact of the fence would be reduced while still providing an effective deterrent.

We also modified the fence to include a 6-inch opening in the fence bottom at set intervals to allow for the state-listed species of special concern northern diamondback terrapin to enter and exit fenced areas so that their nesting and feeding would not be interrupted.

Hoyle, Tanner has successfully worked with airport owners to assess wildlife hazards and install deterrent fences across New England. We have worked collaboratively with FAA and state permitting agencies in order to avoid or minimize natural resource impacts while meeting the goals of improving safety for the public, pilots and staff who utilize these airports. Contact us if you have any questions regarding wildlife at your airport and we would be happy to help!