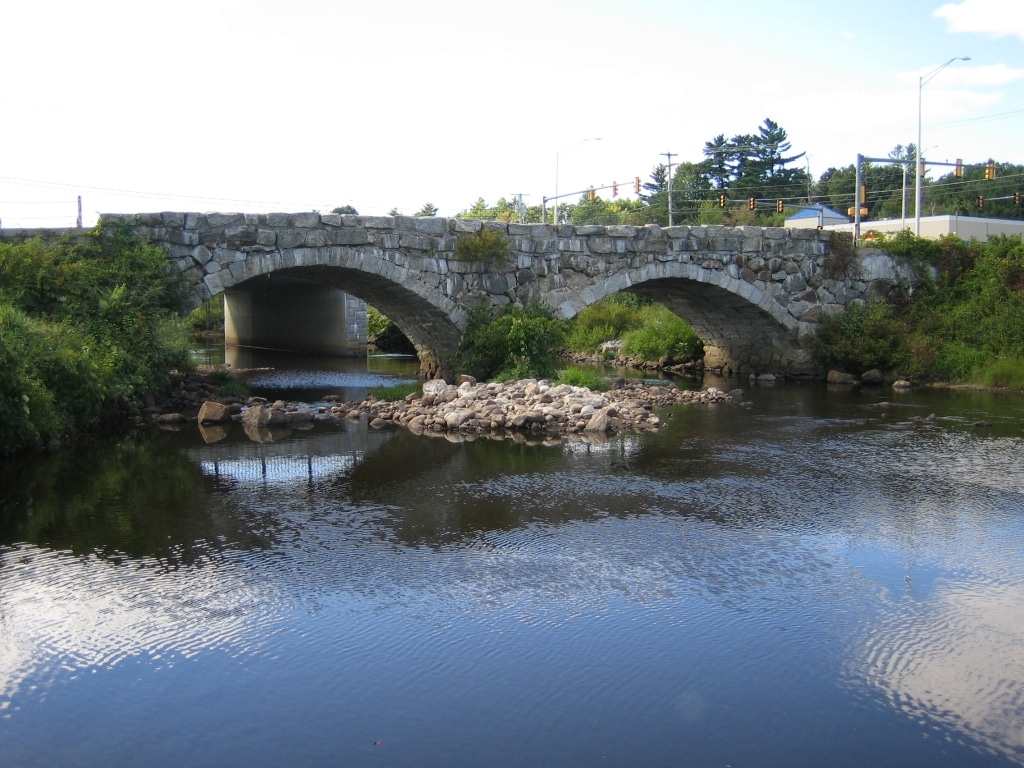 July 2016 struck New England with an extreme drought and dry weather patterns for an entire year in most of the region. Many people are seeing the drought disappear as heavy rainfall replenishes those dry wells. Showers are taken a little less guiltily.

Yet ironically, the seacoast areas of Maine and (some) of New Hampshire are still considered abnormally dry for this time of year. The drought.gov website says that the percent of dry conditions for the Northeast is a total of less than 10 percent. In general, around 90 percent have no dry conditions at all. Despite this time of year being dryer for the coast, long-term totals actually appear normal.

So, why the pesky persistence with this abnormally dry issue?

“Much of the Northeast remains drought free with the exception of coastal Maine, which has been plagued by below-normal precipitation over the summer,” Deborah Bathke reported in the National Drought Summary for August 8, 2017.

Lack of rainfall may seem relatively insignificant in the engineering world to some. Too much rainfall can cause road erosion, mud slides, sewage overflows, and building floods (among other glorious things). Too little rain? Aside from a crispy lawn, what could go wrong?

Well, for starters, a dry season can mean that ground water levels are low. Low water levels mean that engineered structures, like culverts, don’t work like they are supposed to. Which can lead to problems for an entire ecosystem.

Culverts are a great example. Culverts allow for water passage — such as streams, creeks and brooks — to move under roads. Many aquatic species migrate during their lifetimes, so in order to do that, they need to be able to swim or wade through water freely. The National Oceanic and Atmospheric Administration (NOAA) explains that incorrectly engineered or installed dams and culverts can contribute to declining fish populations by not allowing continuous water flow and creating a physical barrier to fish passage. Throughout the watershed, there can be several examples of perched road crossing culverts (where a drop in elevation exists between the end of the culvert and the water body) and culverts that are too narrow, steep or collapsed.

As rain levels increase and droughts are ending, aquatic life has the chance to move more freely through these constricted passageways.

The importance of culverts can be partly attributed to the way the water flows. 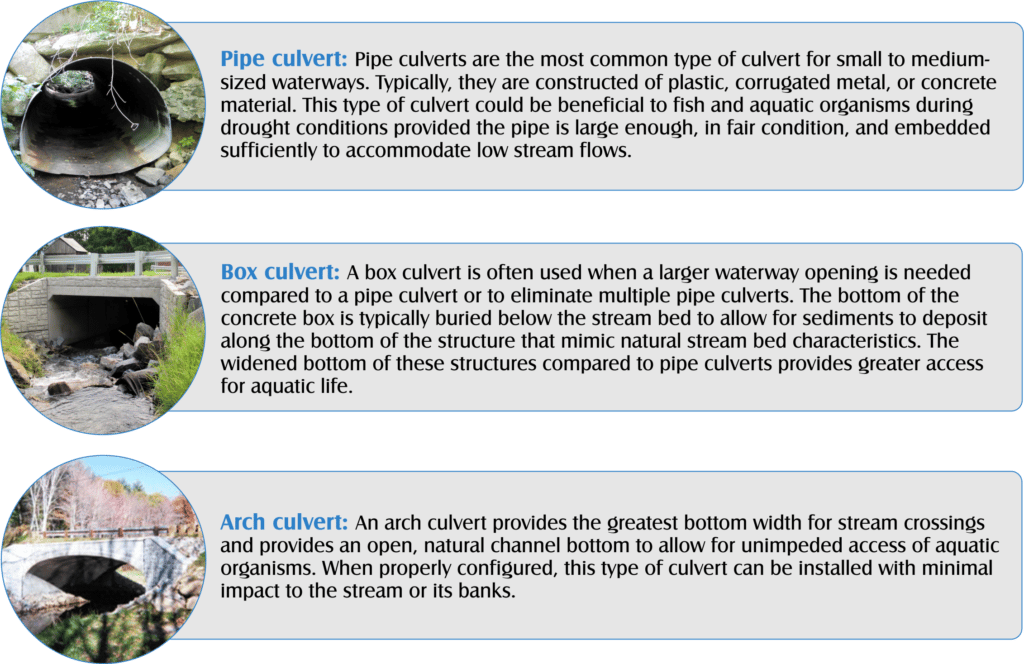 The New England states have turned their attention to the importance of designing culverts that are eco-friendly for the past two decades, with regulations in place in each of the five states that require certain levels of flows, both high and low, to be maintained through culverts in order to protect migrating organisms. From an article by the US Fish & Wildlife Service of Alaska comes the challenge to make roads more fish-friendly:

“What’s under our roads should ideally mimic what’s upstream and downstream,” the article says. “This helps ensure a seamless transition for fish passing underneath. … So how wide is wide enough? To answer that, we must understand the stream’s range of flows. A stream gauge that tracks water level and documents flood events over time can help.”

When accurate stream gauge data is not available, particularly for the smaller creeks or brooks, engineers must examine the existing conditions and develop assumptions on flows, typically using hydrologic models that are standard industry practice.

In short, as you drive from place to place during your day, take time to notice the road culverts you pass over. They have an important role in keeping an ecosystem functioning at its best, even under drought conditions.

Pi… I did not forget the “e”, I am referring to the mathematical constant, π, for the value 3.141592…, a ratio of the circumference of a circle to its diameter. For some it was junior high and others it was high school, but almost everyone is taught the concept of Pi in geometry class in America. The staggering question asked by so many students over the years is “how do we use this in ‘real’ life?” Well we have answered that question for all of you as it relates to engineering:

When designing bridges many of the structures utilize reinforced concrete to provide the strength necessary to support its daily use by vehicles. For many of our bridge projects, the circle is most often representing the area of reinforcing steel used in the reinforced concrete beam.  We determine the total amount of the (steel) reinforcing to determine the capacity of a structural member such as a beam, deck or slab.

In associated roadway design, Pi is used in a slightly different manner, to calculate curvature. A maximum curvature (minimum radius) is used to ensure adequate sight distance at differing speed limits. This promotes safe vehicular travel by providing a level of comfort and expectation to the driver.

Another application for the mathematical constant is in airfield markings. Their purpose is simple – to safely guide pilots during aircraft take-offs and landings, and while taxiing around the airfield. To create these markings, Pi is utilized when calculating the amount of airfield paint required for runway designation markers, taxiway centerlines and edge lines.

Pi is also used extensively in the calculation of areas of gravity sewers, wastewater force mains, water main pipes, storm drains, drainage culverts and other types of utility pipes. These calculations are used to establish the area of the pipe for the purpose of determining flow velocities and flow volumes as well as other types of hydraulics calculations.

Now that we have proved your mathematics teacher correct, and that someday you may need to know the value of Pi, the obvious question remaining is “what does pi and pie have in common?” My answer is Pi is focused on circles, radius and diameters… and so does pie! If you want a great Chocolate Cream Pie recipe check this out!