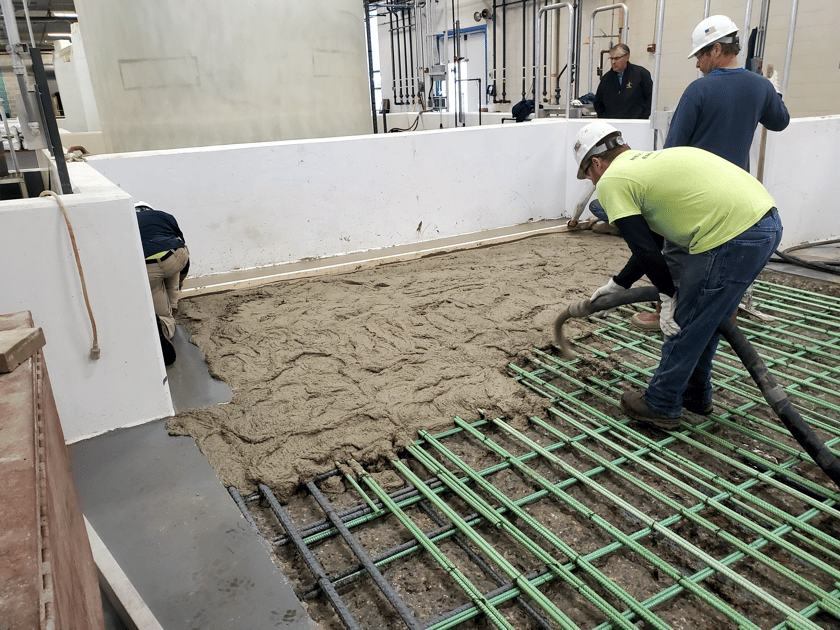 Hoyle Tanner recently completed a structural slab repair project for Manchester Water Works. Due to the structure’s deterioration, there were some changes to the way we estimate project limits. Because of the extensive research and planning we had to do to account for these project limits, we were able to ensure the construction process went smoothly. As a structural engineer, I oversaw this project from start to finish and break down the process that was followed to succeed.

The Manchester Water Works building contains two floors of water treatment. A structural concrete slab supports three storage tanks for the chemicals used to treat the water above the flocculation basins. The concrete slab supporting one of the storage tanks over the flocculation basin showed signs of deterioration in the form of heavy cracking and delamination, likely caused by exposure to the chemicals in the tanks. Repairing the slab was done in three phases: information gathering, plan development, and construction oversight.

Before developing plans for a repair of the slab, the limits of deterioration had to be determined. This was first done using hammer sounding to determine a rough outline of the horizontal limits of the concrete that needed repair. The concrete slab contained a top layer and a bottom layer of reinforcing. If both layers of reinforcing deteriorated, then and the slab had to be repaired to the full thickness; otherwise, a partial thickness slab repair would be sufficient. Since access on the underside of the slab was limited, hammer sounding on the underside could not be done everywhere. Ground Penetrating Radar (GPR) was used to confirm the horizontal deterioration limits and help give an idea of the depth of deterioration in the slab. The GPR results were compared to the structure’s original design plans from 1972 to confirm the concrete’s thickness and the reinforcing location.

Once the horizontal limits and depth of deterioration were estimated, the original design plans were used to understand the thickness of the slab so repair plans could be made to the replacement needs to fulfill the original design capacity for the slab; this was not constant throughout the repair area since the slab was thicker and contained additional reinforcement near column locations. Additionally, the concrete removal lengths needed to extend beyond the limits of deterioration. The added reinforcing could connect to the existing reinforcing that had not deteriorated via a spliced connection or mechanical couplers. Once this was all determined, the plans were developed containing details and notes on how to best remove the deteriorated area, limits of the work for the repair, and repair details.

Once the deteriorated concrete was removed, the removed reinforcing was replaced with epoxy coated reinforcing and the remaining exposed reinforcing was coated with a corrosion inhibitor. Both the epoxy coating on the new steel and the corrosion inhibitor help to prevent the same deterioration from happening again. Fresh concrete was then poured to replace what was removed and restore or improve the original design capacity of the slab. A protective floor coating was also added on top of the repaired area to protect it from future chemicals penetrating the concrete.

Knowles Industrial Services performed the repairs to the concrete slab. Since the plans are developed using the best estimates of deterioration limits from the data collection, construction oversight is warranted to adjust the plans for anything encountered during the repair that was not foreseen or requested by the contractor. Additionally, the on-site observation is used to verify that all of the deteriorated concrete is removed to solid, undamaged concrete and the corroded steel removed (as well as all existing steel that remains) is cleaned and coated to minimize the risk of it corroding again.

Upon removing the concrete, it was determined that the deterioration did not penetrate to the bottom layer of reinforcing and only a partial depth repair was required. The contractor had difficulty obtaining the original steel reinforcing bar sizes from the 1972 design plans, so an approved alternative had to be developed to provide the same structural capacity of the original design with an increased number of smaller reinforcing bar sizes. Overall, the approved field alternative allowed for the repair to be completed and on schedule.

Should you find yourself in need of a repair project like this, or to learn more about slab repair, reach out to me, Ryan McMullen, PE.