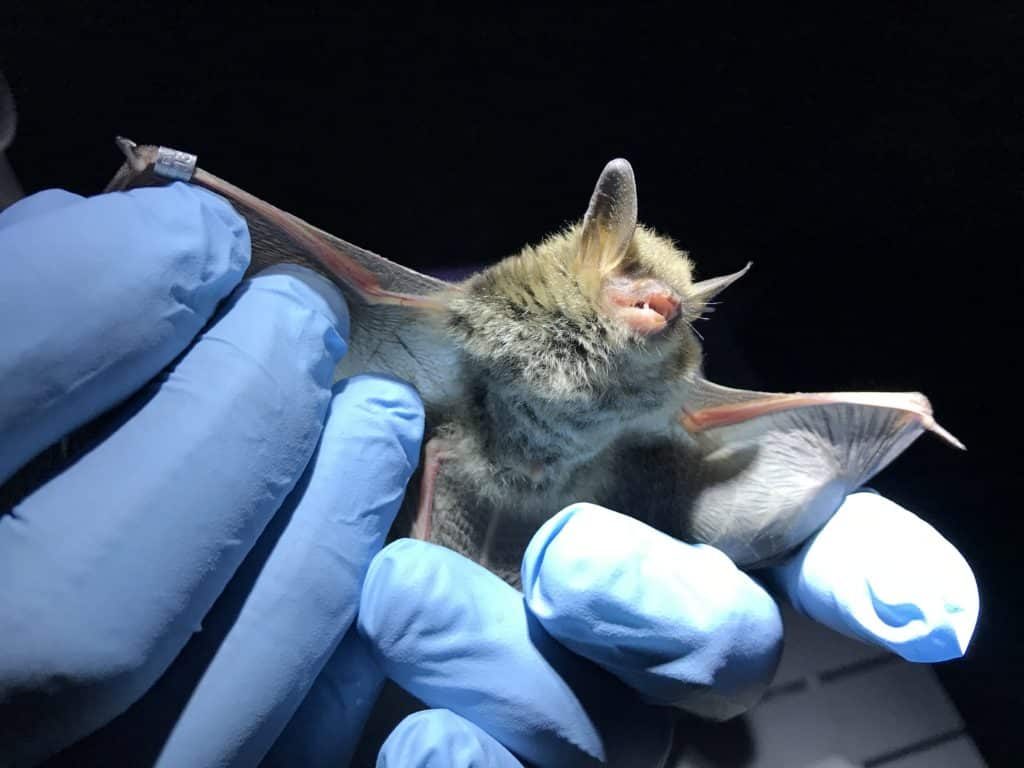 The United States has multiple federal laws and international treaties aimed to protect endangered species. Species conservation is a shared responsibility; our choices and actions are capable of making a difference for the better. As engineers, we at Hoyle, Tanner are committed to the protection of endangered and threatened species by working through strict permitting laws and utilizing environmental experts.

In 2015, the northern long eared bat received news coverage for becoming a threatened species under the Endangered Species Act (ESA). In 2016, it received a final 4(d) Rule, mandating that the species needs conservation help. Currently the main factor threatening these bats is a fungus called White Nose Syndrome, which is the disease responsible for a species decline of up to 99% in the Northeast.

During the winter months, the bats can be found hibernating in caves and mines with constant temperatures, high humidity and limited air flow as hibernacula. In the summer, the northern long eared bats preside primarily in the crevices of dead trees. At dusk they feed on moths, flies, leafhoppers, caddisflies, and beetles. A hibernating bat with White Nose Syndrome can be identified by white fungus on its muzzle, causing the animal to act strangely and often flying out of their hibernacula during the winter months. White Nose Syndrome is currently present in 25 of 37 states within the species range and there are indications that it will continue to spread.

White Nose Syndrome was first identified in New York in 2007 and has since been primarily responsible for the severe decline in species population. Steps in disease management have been taken by many government, non-government and university organizations to decrease the rate the disease is spread.

Since being listed as threatened on April 2, 2015, the northern long eared bat is federally protected under Section 7(a)(l) of the ESA, which requires federal agencies to use their authorities to conserve listed species. In June 2016, the Federal Highway, Railroad and Transit administrations completed a range wide consultation and conservation strategy for transportation construction and expansion projects. According to the article, “The programmatic biological opinion that resulted will help expedite the consultation process related to transportation projects and provide a consistent approach to conservation for the bats. The strategy includes:

How Can You Help?

We share the planet and the responsibility of being hospitable to other creatures. You don’t have to be an environmental specialist to help keep this disease from spreading. Here are a few things you can do:

Do Not Disturb: Cave and mine closures, advisories and regulations are there for a reason. Abide by them. By entering a cave or mine against security standards or recommendations, you could be risking the possibility of disturbing hibernating bats. Waking a hibernating bat can force it to use up valuable energy resources and in turn decrease its chances of surviving the winter. Furthermore, by entering a cave or mine without permission, you may be violating decontamination policies and exposing bats to White Nose Syndrome. Because we still do not know exactly how the disease is spread, you should never utilize clothing, footwear or equipment from an affected area in an unaffected area within the range

Save Dead Trees: A dead tree may be an eyesore compared to the rest of your beautiful yard, but before you cut it down, remember what could be depending on it for survival. Northern long eared bats are forest-dependent creatures that rely on different elements of forests to survive. By removing dead trees during a time when bats may be in the trees, you could be causing harm.

Build a Bat Box: Already cut the tree down? You can replace it with a bat box! By creating this backyard habitat, you are providing a safe and sound location for over 100 bats to roost. “Bat boxes are especially needed from April to August when females look for safe and quiet places to give birth and raise their pups.”

Tell Your Friends: Sometimes you can make the biggest impact by simply spreading the word. There are so many endangered species that need our protection and although a bat with unusually long ears isn’t as glamorous as a tiger or an elephant, it doesn’t make them any less important. Bats play a significant role in regulating the insect population and eliminating crop-destroying pests.

Many people do not understand the role they play in maintaining a healthy and balanced ecosystem. By spreading the word and telling people how they can do their part you will have a significant impact in the ongoing fight for the preservation of the northern long eared bat and endangered species as a whole.

Kimberly Peace is an environmental consultant who grew up in Ohio and moved to New Hampshire 20 years ago with her husband and is still not used to all this crazy snow. She has a MS in Marine Science and before she jumped into consulting she had a variety of jobs working with sharks, and then high school students, which are much like sharks. She has two children who keep her busy running from one sporting event to another, and her car carries snow scrapers and sand castle building toys at the same time. She is also busy in her local town government, serving on the Conservation Commission and the Planning Board for Goffstown.