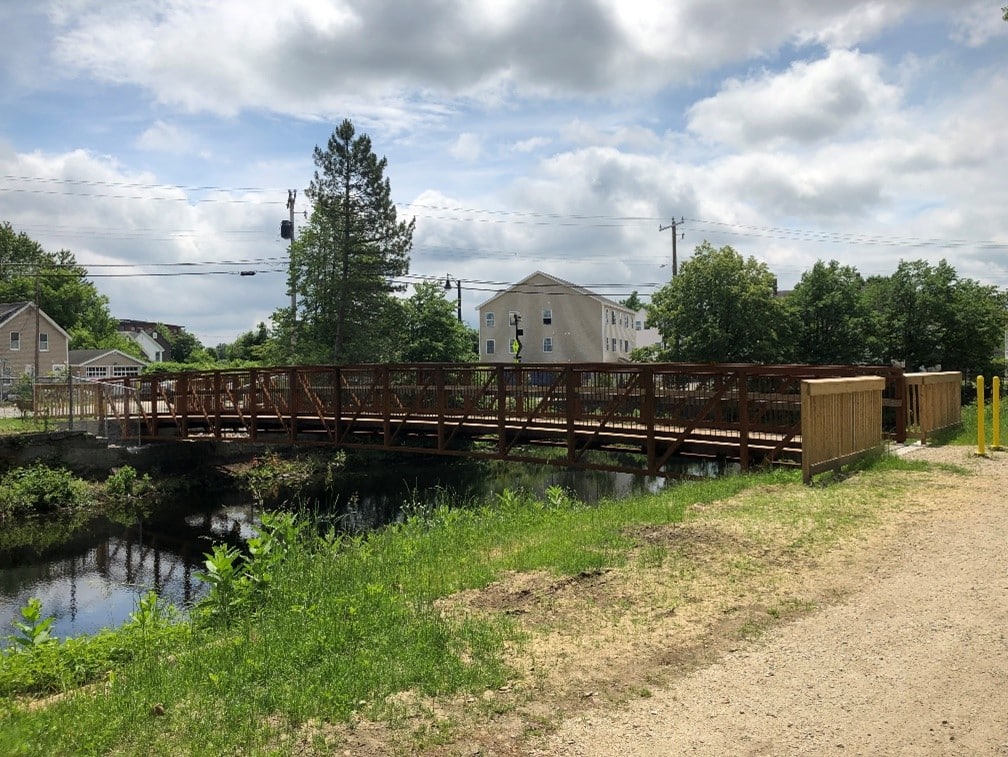 Celebrating Walkability in the Month of April with Pedestrian Bridges

The month of April holds some significant dates for the environment. The month kicks off with National Walk to Work Day on April 2nd, National Walking Day on April 7th, and we round out the month with Earth Day on April 22nd. In honor of our environment, we wanted to highlight a couple of our recent pedestrian bridge projects that encourage more foot and less vehicle traffic.

The Eaton Street pedestrian bridge was built in 1912 as part of the Boston and Maine Railroad. In the 1990s, the City of Nashua repurposed the abandoned railroad into a recreation path called the Heritage Rail Trail. This trail connects the Tree Streets Neighborhood to downtown Nashua and its many restaurants, small businesses, and cultural landmarks. The City closed the bridge to pedestrian traffic in December 2019 due to timber deck and old railroad ties rot. Hoyle, Tanner completed a full structural inspection of the bridge and provided repair recommendations to the City so that the bridge could be re-opened; we also made maintenance recommendations so that the bridge can remain in usable condition for years to come.

To the north of the Heritage Rail Trail and in the center of the City is the 325 acre Mine Falls Park. The City of Nashua received NHDOT Transportation Alterative Program (TAP) funding to build a pedestrian link between Mine Falls Park and the Heritage Rail Trail. This project included many different design features in a small area such as an ADA complaint ramp system, a shared use shoulder along Everett Street, a crosswalk with flashing beacons at Ledge Street, and a prefabricated metal pedestrian truss bridge to cross the Nashua Canal. The crux of the project was to find a way to support the new bridge that would not increase or change the loading on the canal’s southern stone wall or northern earth embankment. To do this, we chose to use helical piles which transfer the bridge load into the ground below the canal. Helical piles have many advantages in urban locations because they can be installed with small construction equipment and with minimal ground vibration. The completed project was open to the public in June 2019.

Part of creating sustainable infrastructure is considering how people will use that infrastructure for years to come. The bridges we design must not only stand the test of time, but they must serve the community, as well as encourage more walkable and rideable communities!

Joe is a Structural Engineer at Hoyle Tanner with both NBIS and SPRAT certifications. He earned a Bachelor’s and Master’s degree from UMass Lowell. Joe and his beautiful wife made the move to New Hampshire to take advantage of the great quality of living available in the Granite State. Outside of the office he has more hobbies than he often has time for including cycling, mountain biking, golfing, snowboarding, hiking, birding and camping.