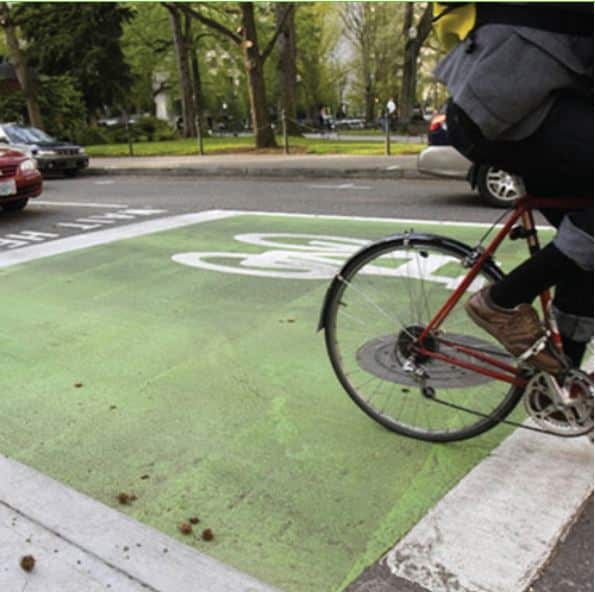 Everyone knows about bicycles. Like any sport, they have a fandom following, from avid Tour-de-Francers to all those dedicated bike-to-workers. Not to mention, it’s practically a rite of passage to learn how to ride one, and it’s the quintessential comparison when talking about things you never forget how to do once you learn.

Despite their popularity around the world, America still shines with its youthful glow in comparison to many historic countries; we just don’t have the same bicycle-laden streets that other countries have grown to cherish. That’s not to say that America isn’t making strides to enhance its bike-ability. Major cities have hundreds of miles of bike lanes, while New York City tops the list at having 1,000 miles.

Though America has some catching up to do, cities have seen overall betterment in roadway safety when communities define where bicyclists should travel on the roads.

One innovative design that’s gaining traction is the bicycle box. From the NACTO website, “A bike box is a designated area at the head of a traffic lane at a signalized intersection that provides bicyclists with a safe and visible way to get ahead of queuing traffic during the red signal phase.”

Bicycle boxes are innovative because they address many safety concerns at once, such as: increasing visibility of bicyclists, preventing “right-hook” conflicts, provides priority for bicyclists, and groups bicyclists into one obvious area, making it easier for cyclists to clear the area quickly.

Recognizing these benefits, Hoyle, Tanner recently designed a bicycle box system on Farrell Street in South Burlington, Vermont, which will become the first approved installation in the State. As Farrell Street is part of the route of the Champlain Bikeway (a 363-mile scenic loop around the lake), the City is dedicated to improving access and safety in this location and throughout the City. At the Farrell Street/Swift Street intersection, the City was particularly concerned that southbound cyclists looking to make a through or left turn would conflict with vehicles turning right to access US 7 & I-189. A bicycle box was the perfect solution. Hoyle, Tanner worked with the Federal Highway Administration (FHWA) and gained interim approval for the City’s use of this valuable tool, which is required for new traffic control devices that have not yet been formally adopted. Partnering with Howard Stein Hudson, Hoyle, Tanner designed the bicycle boxes which will employ special highly visible green pavement markings and thermal or video bicycle detection to reduce collisions and improve safety at the intersection. With this experience, Hoyle, Tanner will look to aid other municipalities and state agencies with this and other emerging traffic control technologies, with a goal of improving the recreational and commuter transportation experience for all users.

Steve is a Project Manager in the Transportation Services Group in our Manchester office. He has spent the last 17 years assisting clients in identifying transportation infrastructure problems and developing engineering solutions. Steve specializes in roadway and traffic engineering, traffic analysis, and intersection and traffic signal layouts. Because of his specialty, he is knowledgeable in the AASHTO, FHWA, ITE, and TRB transportation guidelines. Steve is a past President of the New Hampshire Chapter of the Institute of Transportation Engineers (NHITE) and is a current member.