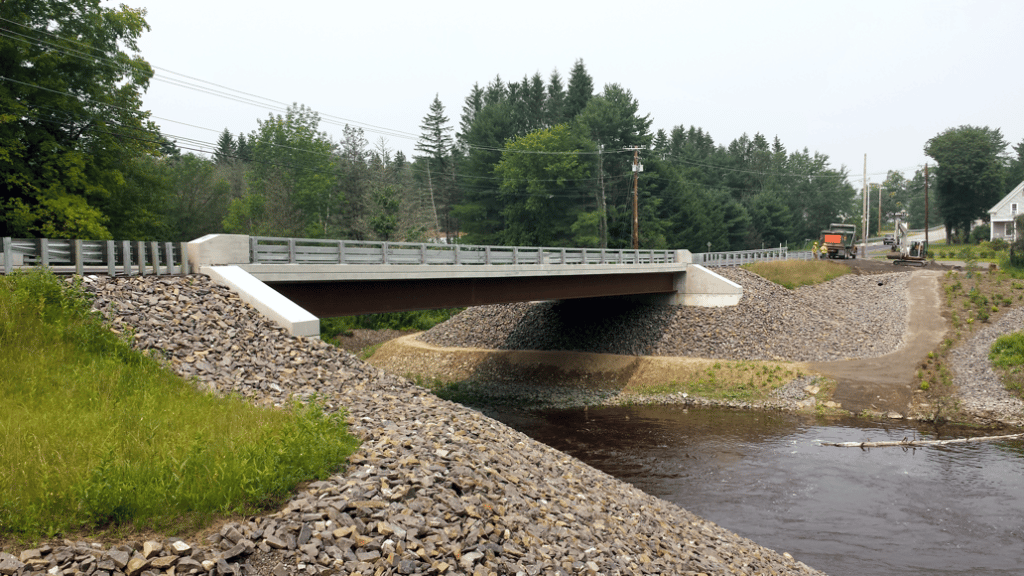 An Aggressive Design Schedule to Replace the Little River Bridge

Hoyle Tanner recently completed a bridge replacement in Maine for a bridge that was bigger than its original structure, and under an accelerated design. Not only was this a fast-moving bridge project for state standards, but the new design also raised the structure above the Little River more to allow more room for storm flows!

In July 2018 MaineDOT and the Hoyle Tanner team began the preliminary design of the Little River Bridge that carries Route 237 over the Little River. The existing bridge was built circa 1952 and consisted of a single 100 foot span riveted steel through girder with a concrete deck. The through girders superstructure consists of two main carrying beams that support the entire bridge, making it a fracture critical structure (“component in tension whose failure is expected to result in the collapse of the bridge or the inability of the bridge to perform its function” AASHTO LRFD Bridge Design Specifications).  That summer, the bridge was posted for a 38-ton weight limit for one truck at a time.

The project schedule was accelerated from typical state bridge design projects. Preliminary design, public meetings, final design, permits and plans were completed in under 14 months. Some other project highlights include:

Detouring traffic around the project was not feasible so traffic was maintained with a two-lane temporary bridge that was constructed immediately downstream of the existing bridge. Once the temporary bridge was in place and traffic was shifted and the existing bridge superstructure was demolished. Abutments were removed to 5 feet below ground surface. A new 135 foot single span steel structure consisting of five steel girders was erected. Increasing the beams from 2 to 5 eliminates the fracture critical designation of the bridge. The new concrete deck was constructed with a combination of glass fiber reinforced polymer and stainless-steel reinforcement to extend the service life of the deck.

The new bridge was opened to traffic in fall 2020. Final wearing surface and project closeout was completed in spring 2021. We worked with the Department to quickly design and replace the structure that had been posted for load. Several local contractors use this crossing and eliminating the posted bridge ensured they would not be restricted in their operations (hauling equipment and materials). Hoyle Tanner is known for our bridge professionals and their expertise, having completed hundreds of bridge projects all over New England. We work with municipalities, agencies and Departments of Transportation to enhance safety, reliability, and aesthetics of all our clients’ bridges

Owen Krauss is a Structural Engineer at Hoyle Tanner with over 12 years of experience. Mr. Krauss’ experience includes construction engineering, bridge design and inspection and project management as well as other ancillary structural design. He earned a BS Degree in Civil Engineering from the University of Maine. He is a registered Professional Engineer in Maine and New Hampshire. He has spent his entire life in Maine, and when he is not working he spends his time camping and exploring with his wife, children and dogs.